I got to working on this release only on last Friday and thus didn't quite get everything in I had planned. But I didn't want the Annual Roguelike Release Party go by without a release, especially since it's been so long since I have gotten anything out. So here's Rogue Effect v0.5.5. 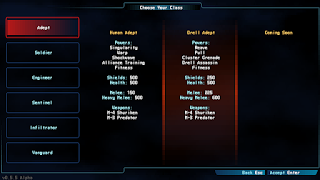 I had evidently planned to do a stealth release of v0.5.2, too, but had forgotten about it. It's even dated the fifth of January and had a fix for Biotic Charge crashing the game. More new stuff for this release then, I guess.

This version adds a new class, Drell Adept, which has to be unlocked first. You can also see numerical weapon stats in the equipment screen now. A feature the Mass Effect games haven't had since the first...

While quickly playtesting this release, the game got into an infinite loop when going into the score screen. I didn't manage to duplicate it but I should probably try to fix it for the next one.

Also, Franklin Chen had left a comment on this blog (like ages ago... sorry) about Tactical Cloak possibly not working correctly. It is in fact not a bug and the power is working as intended. Enemies don't see you while invisible but they will remember where you were the last time they saw you. So if you cloak out in the open, you'll have to move a bit to avoid getting hit.

Other:
* Hastened the game end fade a bit

Fixes:
* Biotic Charge should no longer sometimes crash the game (I hope)
* The score screen had some minor problems
* Armor-Piercing Rounds weren't affecting multi-projectile weapons (namely shotguns)
* There was a slight confusion in what was considered a hostile attack/target for abilities
* Enemies killed from being flung back is now counted for the cause type's kills (biotic etc.)
Posted by Tanthie at 21:26