Damn. It has actually been a full year since the last release of Rogue Effect. This version is a pretty good one, though -- almost feature-complete. I quite couldn't get saving/resuming in as I was trying to get rid of two major bugs that keep resurfacing: Biotic Charge crash and occasional infinite loop when going to score screen after game end.

The former I managed to fix. At least I did beat the game twice as Vanguard while using the power constantly. So the bug is either gone or has become extremely rare. The latter problem remains still unresolved, however. The game should save all class unlocks regardless if it crashes at the end fade or not, though. So you should only miss the gory details of the current character's run and such. I shall continue hunting for the bug and hopefully get it out for the next version.

Speaking of characters, the highlight of this release are the 11 remaining player classes that were missing from the previous one. They all need to be unlocked first but that shouldn't be too difficult. I also added 15 challenges to beat. And they are difficult. Nigh impossible even. But something to attempt if the game feels too easy. 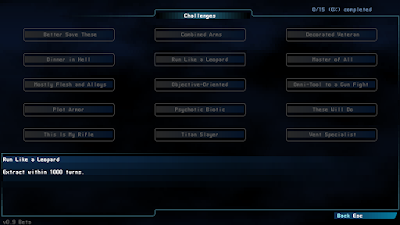 Like Drakefire Chasm previously, I moved this project to Visual Studio as well. I forgot to target WinXP while compiling it -- which is evidently needed to have a program to work on the old Windows version -- but I'm running out of ARRP release window here so you all 12 people still on XP will have to wait until I feel like compiling, zipping, and uploading again. (Drakefire Chasm should be XP-compatible now, though.)

Minor new features:
* A brief intro text when starting a new game
* Added objective and enemy entries to the in-game manual
* Added couple new stats to the numerical item info (and made it more readable)
* Added weapon burst length to the character screen

Tweaks:
* Activating Adrenaline Rush now reloads current weapon if it's empty
* Cluster Grenade missing an enemy now explodes with a delay (like Frag Grenade)
* Overload now stops target's shield regeneration for 8 turns
* Increased Frag Grenade's base force
* Increased Pull's base force
* Pull's initial damage and force are now affected by power bonuses
* Slightly increased Sticky Grenade's base force
* Slightly increased Reave's base force
* Reduced Incinerate's base force
* Biotic Charge now does 300% damage on frozen targets
* Biotic Charge now grants 50% damage reduction for 4 turns
* Throw now does 200% damage to frozen targets
* Throw and Pull now gain 10% of their force as bonus damage
* The force of pushback causing powers is now increased by 50% against targets that are lifted off the ground
* Warp Rounds now increase weapon damage on barriers by 100%
* Tech Armor's cooldown is no longer triggered by other powers
* Tech Armor can no longer be detonated to shorten the cooldown of other powers
* Doubled the duration of explosion visuals
* Power damage bonus now affects Combat Drone's damage
* Changed Combat Drone's Shock damage to 100 (down from 130)
* Guardians can now be staggered by the force of projectiles hitting their riot shield