I ended up playing Drakefire Chasm during christmas and decided to fix couple bugs I encountered while doing so. Not a huge list of changes but still somewhat a surprise release for a game I thought not to work on anymore. 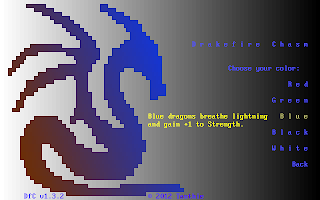 There's also one balance change that should make the final showdown slightly trickier to breeze through. With the black dragon orb's invisibility you could go stand in the middle and release your two ultimate area of effect abilities perfectly safe. Now the invisibility effect breaks when you do a hostile action, leaving you vulnerable and hopefully making the fight a bit more challenging. Of course, you might get lucky and find more than one black dragon orb...

Thanks to all those 14 people who voted DfC on Ascii Dreams Roguelike of the Year poll thingy, btw. Rogue Effect also got three votes, which is nice. I know I kind of promised a new version "in the next few days" from the first release but I just tweaked and polished, and then tweaked some more the menu stuff I added. I didn't want to do a release without any gameplay additions and so it just didn't happen.

I can't promise a release quite this week either but it's getting close. I still want to add a manual or at least list of stuff you can do. I also sort of want to get to v1.0 before the next 7DRL Challenge; Rogue Effect was s'posed to be a 2013 thing. We'll see if that happens. Probably not.

And finally the download link and changelog, which like always, can be found in the zip as well.