Dropbox decided to disable Drakefire Chasm's download link(s) (and to my files in general for too much traffic?). I don't know why exactly but maybe it was the trojan false positive many antivirus software have started detecting in the latest version since last summer that had something to do with it. 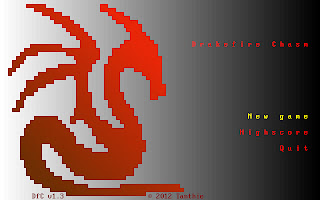 Regardless, I have now uploaded the zip(s) to Tinyupload and it's available for download again. It's not the perfect place (it can have pretty annoying ads if not blocked) but it will do.

I also decided to see if I could remove the "trojan" from the game and opened up the sources in Visual Studio. Apparently I was using few functions that VS considered unsafe. I replaced them and compiled the game, and now it would seem that all but one random thing at VirusTotal agree the exe is clean.

I don't know if it having been compiled in VS affects being able to run it on linux, though. I know that at least previously the game was playable with Wine.

In other news, I failed to declare my 7DRL as failure again with a blog post (as is apparent). I thought I would get the game out just a little bit after the challenge, and then make the post with a release. But then I guess I sort of lost interested to finish it and I'm still waiting for the right moment to do so. I definitely want to, though, as I think it has potential to be interesting and there's not that much left to implement. I don't want Checkmate in Rouge to become another years-long project like Rogue Effect.

...Which is in a pretty good shape actually! I have been sitting on an almost feature complete version of it for some time now. I still want to do some more playtesting and try to add saving. I also discovered Biotic Charge can still crash the game -- even if very rarely. I guess I'll have to make an attempt at fixing that for good. But I'm confident that there will be an actual release in the not-too-distant future.
Posted by Tanthie at 21:02